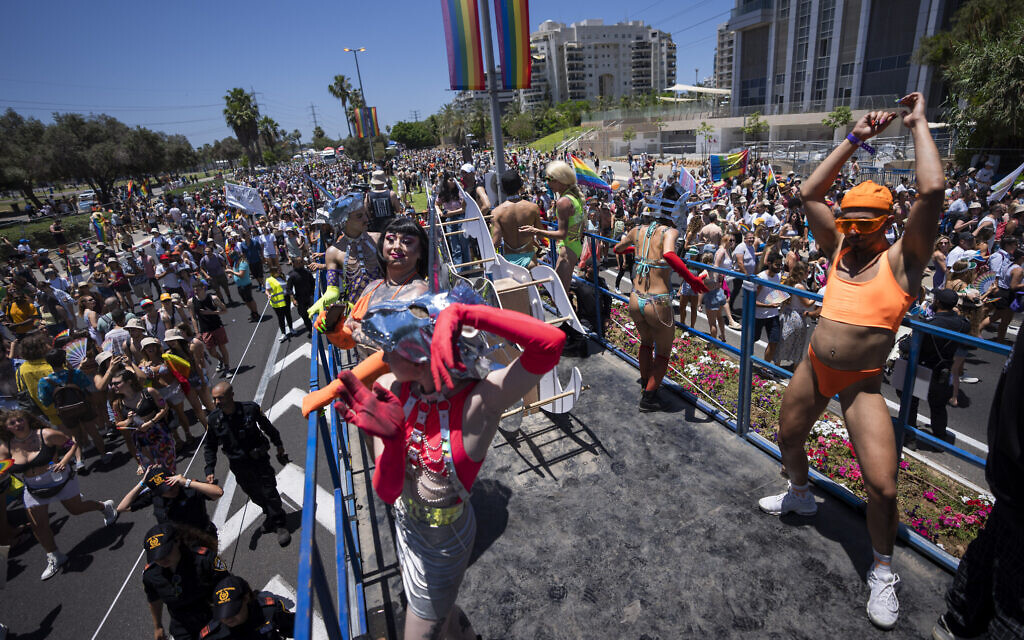 Tel Aviv held its annual Pride Parade on Friday, with more than 100,000 people attending the celebrations in the Israeli coastal city.

The parade, now in its 23rd year, started at noon and was due to end around 7 p.m.

“We won’t let anyone in our country be afraid, we will always provide protection to people living in this country,” Cohen said.

“We will not give in to people who threaten violence and terror, every such threat will face more budgets and investments.”

She also said her office was working on opening additional LGBTQ centers outside of Tel Aviv.

About 30 minutes into the event, the municipality said attendance was already over 20,000 people. The Ynet news site later estimated that more than 80,000 people attended.

Participants in this year’s parade went down Rokach Boulevard in the north of the city rather than along the traditional central Tel Aviv route. The change is believed to be due to major construction work across the city as part of the new light rail system.

The march took off from the Sportek complex in Yarkon Park and continued on Rokach Boulevard until it reached a part of the park where the main stage was set up.

Addressing the crowd, Labor Party leader Merav Michaeli began by stressing the significance of the new road, which she said was used for the first-ever parade in Tel Aviv.

“The first time the parade left Shenkin [street] over 20 years ago he came here, and here they are, returning to the march with pride. Nothing can beat that,” she said.

“But there are those who are not here with us because others are still trying to bully them and say bad things about them,” she said. “But we won’t let them!” We just won’t let them! Freedom, freedom of choice and freedom to choose love – we will never give up on that,” she said to cheers.

Also present, Foreign Secretary Yair Lapid highlighted his efforts on behalf of the LGBTQ community, including the decision last year to hang a Pride flag outside the Foreign Office for the first time. He recalled that far-right MP Itamar Ben Gvir had sent a letter to the attorney general demanding that the flag be removed. “My response was ‘who asked you? ‘” Lapid said, garnering cheers from the crowd.

“We are winning the fight for [LGBTQ] community but it’s not over, we must continue to lead it because as long as there is an LGBT child in the periphery who needs our protection, in his honor we will walk, ”he said.

Natalie Moon told the Ynet news site that she was a lifelong devotee. “I was at the parades when we were walking on the boardwalk and being spat on. Although we have made great strides, in recent years we have seen an increase in homophobia.

Participants pose for a photo with rainbow-colored fans during the annual Pride Parade in Israel’s Mediterranean coastal city of Tel Aviv on June 10, 2022. (Photo by RONALDO SCHEMIDT / AFP )

We see a global trend of people wanting to take our rights, but I think we are in a rallying battle.

This is their last blow, we will win. I am a single mother, this year I did not go to a parade in Jerusalem. In Tel Aviv, I feel safer. ”

“I have come to celebrate pride and show my presence to really fight for our rights as LGBT people in a country which unfortunately this year does not treat all citizens equally,” said Linoy Aharon. She said parts of her own family refused to come to her wedding earlier this year.

“As a married couple, we constantly encounter things that make us feel unequal, but I came here to rejoice and say ‘thank you’ for what we have,” Aharon added.

A participant poses for a photo during the annual Pride Parade in Israel’s Mediterranean coastal city of Tel Aviv on June 10, 2022. (Photo by RONALDO SCHEMIDT / AFP)

Ahead of the parade, police urged the public not to enter the city by vehicle unless absolutely necessary.

Ayalon Freeways (Route 20) will remain open to traffic throughout the day.

Police noted that parking will be prohibited along the parade route on Rokach Boulevard and advised the public to use one of the many parking lots in Tel Aviv and nearby towns.

Participants were encouraged to use public transport to reduce traffic congestion in the area. Starting at 5 p.m., special buses will depart from Rokach Boulevard every 15 minutes for the surrounding suburbs of Givatayim, Ramat Hasharon and Holon.

Ahead of the parade, Public Security Minister Omer Barlev said police and the Tel Aviv municipality had taken steps to ensure the safety of participants.

“The Tel Aviv Pride Parade is a public holiday for the LGBTQ+ community, which symbolizes the uniqueness and openness of the city and brings Israel a lot of respect around the world,” Barlev said Thursday during a briefing. an assessment of the situation. “Israeli Police, together with the Tel Aviv Municipality, is ready to organize a proper and safe parade.”

“I invite everyone who is interested to come and take part in this special celebration in Tel Aviv. Your safety is in good hands.

Last year’s events marked the “largest such parade held in the world since the COVID-19 outbreak”, according to the municipality, and drew around 100,000 people.

Police said last year they arrested around 50 suspects throughout the day, including several who allegedly sought to harm tens of thousands of revelers at the mass festival.

Pride parades in Israel have taken place under a heavy police presence, particularly since 2015, when an ultra-Orthodox extremist stabbed 16-year-old Shira Banki to death during the parade in Jerusalem.