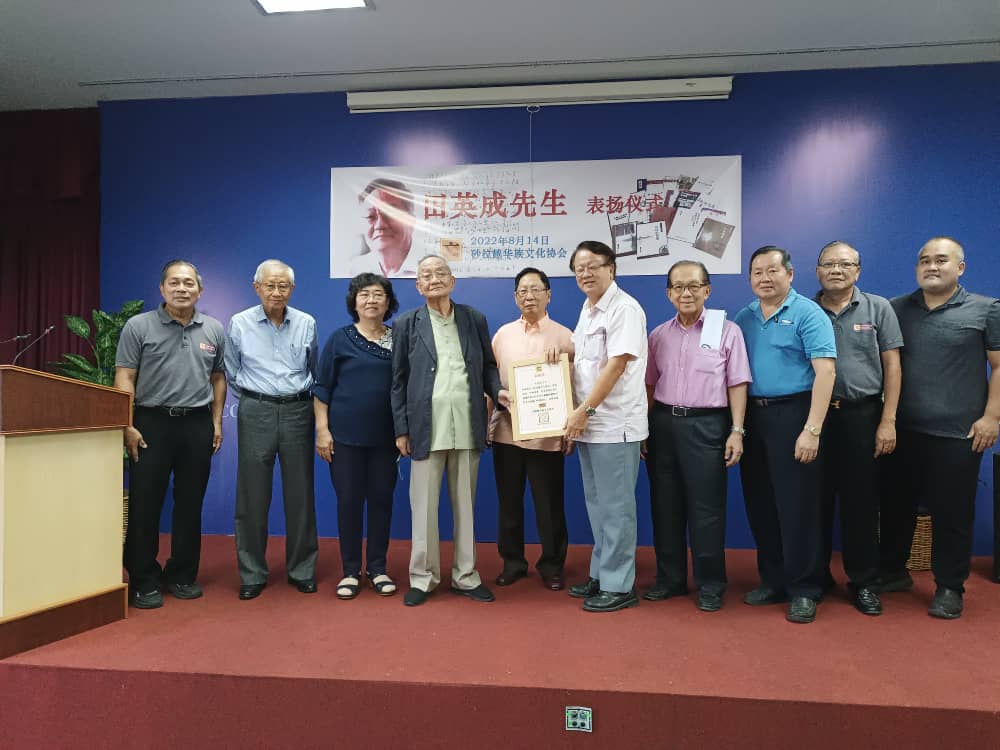 Albert (sixth from left) presents the certificate to Chan, in the presence of Temenggong Lau (fifth from left) and others.

SIBU (August 16): The Chinese Cultural Association of Sarawak pays tribute to Chan Eng Seng for his commitment to research work on the history and culture of the Chinese community in Sarawak.

According to the association’s president, Albert Lau, Chan’s lifelong work not only gained local fame, but also received international recognition.

He also believed that Chan’s background as an editor and columnist for the local Chinese press had helped Chan immensely in exploring Chinese culture in Sarawak.

“In 2018, I went with him to Xiamen, China, to participate in an academic study on Chinese settlements in Borneo. His vast research work has been very well received there.

“There aren’t many professionals who are as committed as he is to promoting Chinese culture in Sarawak; it is something the people of Sarawak are proud of,” Albert said in his speech before presenting Chan with a certificate of recognition at a simple event held at the association’s premises in Salim Road here on Sunday.

Moreover, Albert said that Chan not only compiled historical information about early Chinese settlers in Sarawak, but also collected several items related to this history, such as books and other written materials.

“Now he (Chan) hands over all these (items) to our association for safeguarding, so that historical facts and evidence of early Chinese immigration to Sarawak will not be lost.

“He and his wife hope that in the future these objects can help other researchers studying the history of Chinese settlement in Sarawak and their culture,” Albert said.

He acknowledged that there will always be obstacles that researchers will have to face and overcome in carrying out their work.

In this regard, he said that the association has always strived to provide a better enabling environment for a research enterprise.

“We have been working towards this over the past three decades. We have organized seminars and sponsored local writers for their publications.

“We have a store and a library to preserve historical documents and writings.”

Albert also expressed hope that upon completion of the association’s own building in Salim Road, it would further facilitate research work.

Honoring the scholars for their accomplishments, Albert said Chan was the second to whom the association has ever honored.

“The association awarded a researcher, Lau Tze Cheng, for the first time in 1996.

“Both have produced significant work. In fact, they are researchers who have been overlooked by the community,” he said.