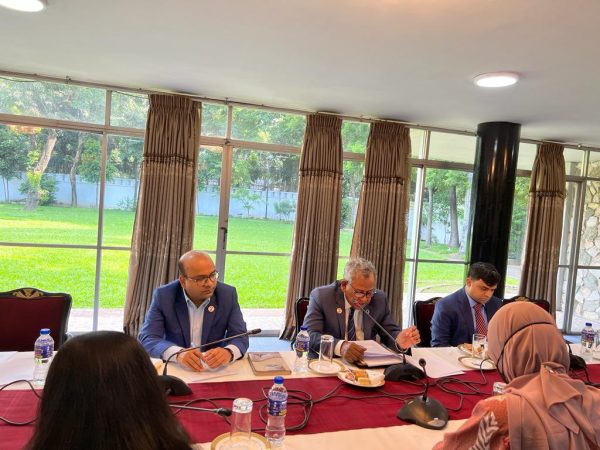 On September 16, an 18-year-old Rohingya boy was killed and five others injured when mortar shells fired from Myanmar landed and exploded in no man’s land near the Tumbru Bazar border area in Bandarban. About 4,000 Rohingya are said to live in this area.

Shells have landed on the Bangladeshi side of the border over the past few weeks and so far the response from Bangladesh has been rather muted. Shortly after the death of the Rohingya teenager in the bombardment, Bangladesh’s foreign ministry summoned Myanmar’s ambassador to Dhaka Aung Kyaw Moe to protest the bombardment and violation of Bangladesh’s airspace.

Fighting between the Myanmar army and the Rakhine army has reportedly intensified in northern Rakhine and Chin states since early August.

Get notified with the story of the week and develop stories to watch across Asia-Pacific.

“We have lodged a strong note of protest against violations of air and land space and warned Myanmar that such actions should not be repeated,” said Rear Admiral (Retired) Khurshed Alam, Secretary of the maritime affairs unit of the Ministry of Foreign Affairs. Emphasizing that “the conflict between the Arakan Army and the Myanmar Army” is an “internal affair” of Myanmar and that how Myanmar chose to “resolve” it depended on that country, he stressed that the shells falling on Bangladesh were not acceptable.

“No mortar shells or bullets should land on our side. You have to take responsibility for that,” he said.

“If even a brickbat lands on the side of Bangladesh [of the border], it is a violation of international rules. Myanmar must take responsibility,” said Major General (Retired) Abdur Rashid, Executive Director of the Institute of Conflict, Law and Development Studies.

“As we do not want conflict, our efforts are underway to find a peaceful solution with Myanmar. We will do everything,” Bangladesh’s Home Minister Asaduzzaman Khan Kamal said. “We repeatedly warned Myanmar through the Ministry of Foreign Affairs, but they ignored the warnings.” He said Bangladesh would inform the United Nations if Myanmar did not stop the firing near the Bangladeshi border.

This escalation of tensions along its border with Myanmar will affect Bangladesh and the region in various ways.

First, it will have an impact on the repatriation of Rohingya refugees. Bangladesh is home to 1.2 million Rohingya who escaped the genocidal violence unleashed against them by the Burmese military. This refugee population has become a major concern for Bangladesh. Dhaka has engaged in talks with Myanmar to find ways to repatriate the Rohingyas to Myanmar. However, the repatriation process has yet to begin as Myanmar’s military regime has set conditions for repatriation, indicating its reluctance to take back the Rohingya.

Current border tension will impact repatriation efforts. As Dhaka-based international relations expert Professor Imtiaz Ahmed has argued, Myanmar may be aiming to create a chaotic situation along the Bangladesh-Myanmar border so that repatriation is delayed and forgotten.

Second, tensions between Bangladesh and Myanmar will impact sub-regional cooperation within BIMSTEC (Bay of Bengal Initiative for Multi-Sectoral Technical and Economic Cooperation), an organization of member states comprising Bangladesh, Myanmar , Bhutan, India, Nepal, Sri Lanka and Thailand, which are coastlines of the Bay of Bengal. BIMSTEC started in 1997 but it was not until 2022 that member states adopted a long-awaited charter. At a time when SAARC is not functioning due to the contentious Indo-Pakistani relations, countries in the region looked to BIMSTEC to reap the benefits of cooperation. Such hopes could be dashed if tension between Bangladesh and Myanmar escalates along the border.

Analysts also point to China’s geopolitical restraints as a potential source of rising tensions along the Bangladesh-Myanmar border. While India and the United States are pushing Bangladesh to join the Quad, China is keen to keep Bangladesh neutral and has asked Dhaka to join its nascent Global Development Initiative (GDI) and the Global Security Initiative (GSI). ).

During his visit to Dhaka in the first week of August, Chinese Foreign Minister Wang Yi had in-depth talks with Bangladeshi Prime Minister Sheikh Hasina. Geopolitical issues would have been the main point on the agenda of the discussions.

A prominent Bangladeshi political analyst told The Diplomat that there are close ties between China and the Burmese junta and that China wields considerable influence over the regime. It is possible that China is behind the recent tensions along the border with Bangladesh, the analyst said, adding that through the bombings in Bangladesh, China signals that it can create problems for Bangladesh if it wishes via the Myanmar border.