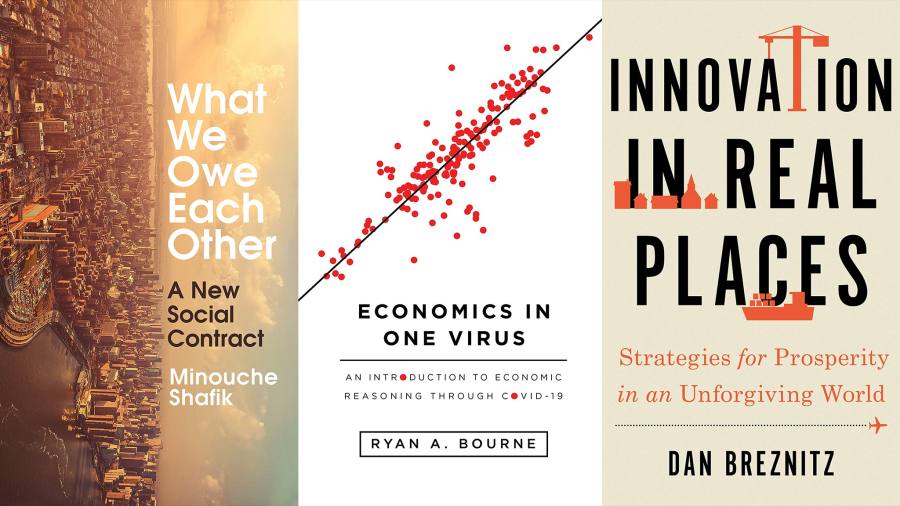 The power of creative destruction: Economic upheavals and the wealth of nations
by Philippe Aghion, Céline Antonin and Simon Bunel, translated by Jodie Cohen-Tanugi, Belknap Press $ 35 / £ 28.95 / € 31.50

In this important work, Philippe Aghion of the Collège de France and the London School of Economics and two collaborators shed light on the research on Joseph Schumpeter’s seminal idea of ​​“creative destruction”. This is based on three foundations: on the one hand, “innovation and the dissemination of knowledge are at the heart of the growth process”; second, “innovators are motivated by the possibility of a lucrative monopoly”; and, finally, innovation threatens the incumbent operators, who will fight to thwart it.

The economy in a virus: Introduction to economic reasoning through the Covid-19
by Ryan A Bourne, Caton € 14.99

In this excellent book, Bourne of the free market Cato Institute applies economic ideas to the issues raised by the pandemic. Among other topics, it elucidates externalities, the relationships between private behavior and public policies, cost-benefit analysis, marginal thinking, decision-making under uncertainty, regulatory trade-offs, the value of trade, how politics determine who is saved and why we were not prepared for such a widely recognized danger.

In this fascinating book, Breznitz, professor at the Munk School at the University of Toronto, argues that innovation is “the only means of ensuring long-term sustained economic growth and human well-being ”. But, above all, “innovation is not an invention, neither is high technology and the creation of new technologies and new gadgets”. It is “the entire process of taking new ideas and designing new or improved products and services.” This Catholicism gives fascinating insights.

Values): Building a better world for all
by Mark Carney, William Collins £ 30

Carney, the former Governor of the Bank of England, wrote a surprising book. He begins by emphasizing the distinction between a market economy and a market society. He then discusses how three crises – the global financial crisis, the Covid-19 crisis and the climate crisis – are calling on us. Finally, it is a call to recognize the value of values, among which “responsibility, equity, integrity, dynamism, solidarity and resilience”.

In this fascinating book, Collins, a man who gave an inherited fortune, describes in detail the web of legal protections – tax havens, trusts, shell companies, even charitable foundations – built by intelligent and unscrupulous members of the industry. the defense of wealth, to protect vast fortunes, themselves often the product of fraud, corruption and outright gangsterism. Read and cry.

Lessons from an economist on happiness: Goodbye gloomy science!
by Richard A Easterlin, Springer € 9.99

Does money bring happiness ? Richard Easterlin, the grandfather of the “happiness economy”, has long argued that it is not. He also insists that we can measure happiness and, once that is done, it is up to the government to promote it, rather than national income. It is an increasingly shared belief. But it should be noted that according to the World Happiness Report, the happiest countries are all successful western democracies.

Religion and the rise of capitalism
by Benjamin M Friedman, Knopf £ 37.50

Harvard’s Friedman discusses the relationship between religion and the rise of capitalism, which German sociologist Max Weber wrote about at the turn of the 20th century. Friedman emphasizes two particularly important points: first, the eighteenth-century religious belief in the possibility of improvement on earth permeated the economy of the early days; and, second, the idea that socialism (or, worse, communism) was simultaneously hostile to Christianity and capitalism created the powerful ideological alliance seen in contemporary American conservatism.

Help: From the global crisis to a better world
by Ian Goldin, Scepter € 16.99

Goldin, of the University of Oxford, argues that before the pandemic, the world went to hell in a handcart: rising inequality, rising populism and environmental catastrophe. But the shared catastrophe of the pandemic could save us. “The task now,” he said, “is to transform reactive responses to health and economic emergencies into a proactive set of policies and actions to create an inclusive and sustainable world of shared prosperity.” It is an optimistic view. Will it happen?

Tell us what you think

What are your favorites from this list – and which books have we missed? Tell us in the comments below

#We Are Renting: Capitalism, cannibalism and why we must ban free riding
by Fred Harrison, Land Research Trust £ 14

As one of Henry George’s foremost contemporary devotees, Harrison is, unlike others who believe themselves to be such, a truly heterodox thinker. George, an influential 19th century writer, emphasized the disastrous results of land privatization, which created a class of cash-extracting parasites. Harrison has the same underlying idea but expands it. Rent-seeking, he argues, is the great destroyer of civilizations. He’s not wrong.

Nobel laureate Kahneman has co-authored with Sibony of HEC Paris and Sunstein of Harvard a fascinating book on “noise”, defined as “the unwanted variability of judgments, and there is too much of it.” Noise is what is left after the bias has been removed. It is “the variability of judgments which should be identical”. Noise creates errors, sometimes of enormous magnitude. It is difficult to eliminate. But we can try. But, first, we must recognize its importance.

Market release: America’s fight to break free from the grip of the invisible hand
by Mike Konczal, The new press € 18.99

The United States and, to a much lesser extent, other high-income democracies are in the midst of one of those historic battles over the role and limits of markets, as they were in the 1930s and again. in the 1980s. Konczal of the Roosevelt Institute is one of the warriors in this fight, arguing fiercely for the need to set much narrower limits on what is left in the markets than has been the case in recent years. last decades. A powerful controversy.

The next financial crash – And a reconstruction plan
by Uli Kortsch (ed.), iUnivers € 20.95

This collection of essays starts from a simple and unmistakably correct point: our monetary system, built as it is on debt created by private for-profit companies, is fundamentally fragile. Addressing this fragility required ever-increasing support and regulation from governments and central banks. This creates a huge moral hazard and thus encourages the creation of more and more debt. We need a better system. This book explains why and how it could ultimately happen.

This book is written by an influential thinker on an important topic at a time when confidence in the leadership of governments has increased dramatically compared to confidence in decentralized competition within markets. Mazzucato recommends goal-driven innovation as the way forward for the world. Personally, I am very skeptical. But others must make up their own minds about these important arguments.

McCloskey is a unique figure in economics. In this little book, she sums up her credo: it is quite simply that humans are not machines. A social science, economics, must encompass the humanities, which study what humans think of themselves. It is our ideas, not institutions or technology, that created the modern world. In short, “we need a better economy, a better humanomics, an economy with humans left behind.”

What we owe to each other: A new social contract
by Minouche Shafik, Bodley’s Head € 18.99

Shafik is an initiate, turned radical. She is Director of the London School of Economics and previously held senior positions at the World Bank, UK Department for International Development, IMF and Bank of England. In this intelligent and lucid book, she calls for a new social contract based on three principles: security for all; investment in capacity; and efficient and equitable risk sharing.

The rise of China has been the transformative economic story of the past four decades. But why has China adopted its incremental “reform and openness” strategy? German Weber, now at Amherst, provides a well-documented answer: the Chinese state “uses the market as a tool in the pursuit of its broader development goals.” Above all, by avoiding “shock therapy” he sought to protect “the peaks of the economy” from destabilizing change.

All week FT writers and critics are sharing their favorites. Some highlights are: