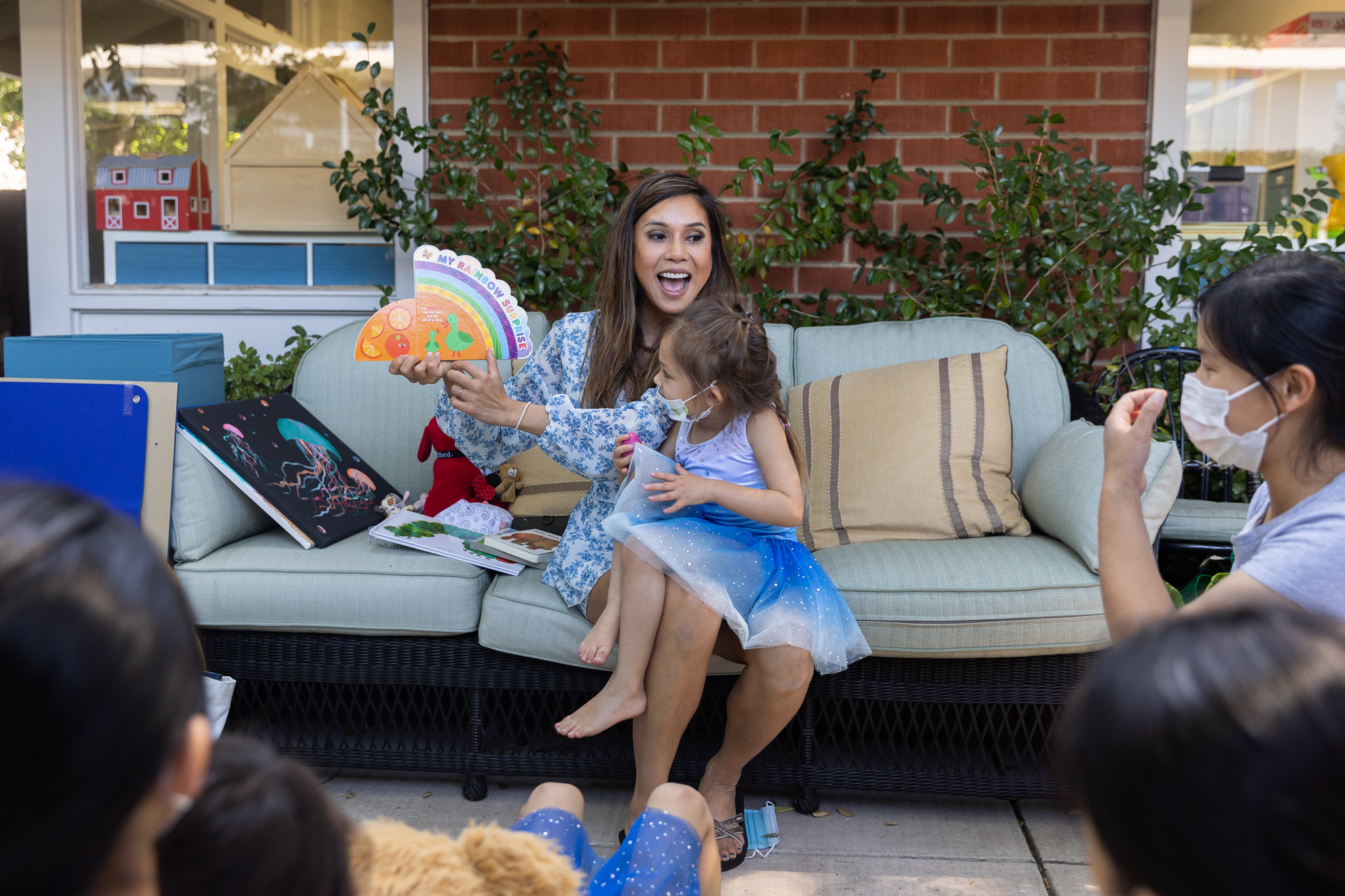 Every Saturday in the summer at the Little Bookworm Library in Menlo Park, children make kites, color ink paints, rice paper and an array of other crafts during camp of Chinese culture. In another area of ​​the library, children and parents learn to prepare Chinese desserts and other dishes in the Little Chef cooking class. And at Chinese Story Time, preschoolers are captivated by specially selected books written in Mandarin.

Both a library and a community center, the Little Bookworm Library is a place where Chinese families can celebrate their heritage while encouraging literacy, and where the wider community can learn about Chinese culture.

The newly opened library is the brainchild of Atherton’s mother, LuLu Roberts, who moved from Taiwan in 2008 to the Midpeninsula. As a mother of four young children, Roberts said she struggled to find children’s books or Mandarin storytimes at the Menlo Park Public Library. .

“There was a very small percentage of books for the Asian patron, and the programs seemed to be only in English or Spanish,” Roberts said.

“I want to pass on my legacy to my children,” Roberts said. “It’s so important for them to recognize who they are.”

Roberts said she believes many second-generation Chinese-American children either deny the Asian part of their ancestry or “become molded into a stereotype.”

“It’s hard because their skin color is different and the culture that their parents instill in them is different,” Roberts said.

With seed money from her husband’s family, who co-founded the investment firm Kohlberg, Kravis and Roberts, she established the Joy Culture Foundation with a board of directors that shares her vision.

Roberts said she wanted to create a cultural space in Menlo Park because of the area’s central location on the peninsula and because she lives minutes from downtown.

It was not an easy search and the pandemic delayed her timeline, she said.

Roberts said it all came together in the summer of 2021 after a landlord called unexpectedly to offer him 2,200 square feet of space in a building he owned in downtown Menlo Park. .

“I feel like I surround myself with people who support me,” Roberts laughed. The space at 934 Santa Cruz Ave. includes a private courtyard and dedicated parking.

Relying on a small team and the work of many volunteers, the Little Bookworm Library opened its doors in February, just in time for the Lunar New Year celebrations. Roberts pointed out that it was not just the work of interested Asian families that created the library.

“There were students from Menlo Atherton High School who came to build the shelves,” she said, noting, “We welcome all races – people interested in Chinese culture.”

The foundation consists of three facets: the play spaces, the programs and the library. Roberts lights up when she describes the mommy/baby programs that take place in the center’s colorful, toy-filled section.

“They can come and spend quality time here with their babies,” Roberts said, adding that it’s a chance to bond between mother and child and other mothers.

Ivy Sun, who lives in Santa Clara, brings her 3-year-old daughter, Summer, to the center almost every two weeks to participate in Mandarin story times and other preschool programs.

“It’s a place where I can feel safe. … The kids have fun and make as much noise as they want,” Sun said.

Programs offered to school-aged children are generally taught in English and Mandarin by experienced educators. They include a wide range of courses, from art workshops and calligraphy to cooking and mental arithmetic. Two multipurpose rooms are used for lessons while parents sit outside in a shaded courtyard and socialize.

“I love it when I see parents here throwing their own party,” Roberts said.

The library contains contemporary books, many of them published in Taiwan, which are written specifically for elementary school children. Roberts said there are traditional and simplified Mandarin books, as well as graphic novels for older children — and their parents. The aim is to provide the essential advantage of language skills.

“These kids will be illiterate so they can read Chinese,” Roberts said. She pointed out that studies show that it takes a person 13 years to acquire enough language skills to use them for a lifetime.

“Language is a tool, but ultimately it’s about the culture and the community they’re in,” Roberts said. “The first generation parents were so busy trying to fit in that they lost their heritage and now want it back.”

Roberts said she believes the aspect of parent-child involvement really helps this process. Whether it’s fostering hand/eye coordination through Play-Doh or solving clues together as part of the Go game, “the important thing is that it’s a place to build community,” a- she declared.

The foundation operates on a membership basis, with families paying $50 a year to use the center and borrow books from the lending library. Roberts said there are currently 200 members, all of whom heard about the foundation through word of mouth. Families as distant as San Jose and Hayward became members.

Jennifer Nguyen said she, her husband and two elementary-aged children make the 30-minute drive along the San Francisco Peninsula to the Little Bookworm Library every weekend.

“Our family is quite Americanized and we only speak English at home, so we didn’t have much opportunity to participate in cultural activities before the Joy Culture Foundation,” Nguyen said.

Nguyen said her whole family uses the library: her children participate in lessons, such as calligraphy, while she and her husband look for books to take home and read with the family.

“Ultimately, we want to help the community understand who we are,” Roberts said. “We are all different, but everyone is included.”