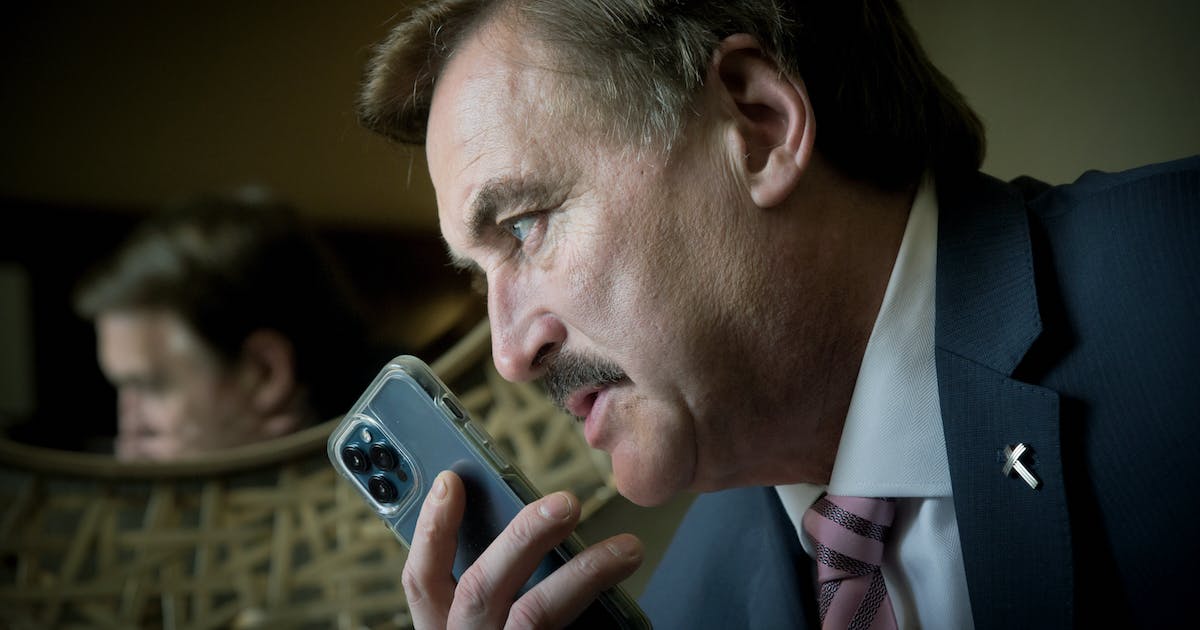 MyPillow CEO Mike Lindell said he was driving through the drive-thru of a Hardee fast-food restaurant in Mankato on Tuesday when FBI agents surrounded him and seized his cellphone via a search warrant.

“A car pulled up perpendicular in front of me. Another one to my right. Another one came up behind me, all kinds of cars,” Lindell said, speaking to the Star Tribune from another phone on Wednesday. “I opened the door, I said ‘Who are you?’ And they said, ‘we’re the FBI.'”

Lindell said he was driving home from a duck hunting trip in Iowa when he stopped to eat. In an interview lasting almost 40 minutes, he lambasted both political parties, the government and the media, including the “rotten Star Tribune”, for not accepting his baseless claims of voter fraud.

He said authorities questioned him about Dominion Voting Systems and a Colorado employee who was charged in what prosecutors call a “deceptive scheme” to breach voting system technology used across the country.

Lindell hosted a “cybersymposium” in August 2021 where Peters appeared on stage. The MyPillow mogul promised to reveal evidence of tampering with voting machines at the event, but did not follow through. Instead, a hard-drive copy of Mesa County’s voting system was distributed and posted online, attendees and state officials said. The copy included proprietary software used by election offices nationwide that experts say could allow anyone to probe the system for vulnerabilities that could be exploited.

Lindell has been one of the loudest and most prominent voices pushing voter fraud conspiracy theories since the 2020 election. He relied on previously debunked claims from other sources to support his argument that the election was stolen from Trump.

He reiterated some of those claims on Wednesday, accusing the Chinese Communist Party and “one-party, deep state, globalists” of “stealing” the election. And he accused Republicans who did not support baseless voter fraud theories of a cover-up, calling them “criminals.”

Lindell’s false claims did not come without consequences. He and his company MyPillow are facing a $1.3 billion defamation lawsuit from Dominion Voter Systems and Smartmatic. Lindell and MyPillow have also filed lawsuits against the voting machine companies.

During the meeting with the FBI, Lindell said he asked the agents if their warrant was related to the Jan. 6, 2021 riot at the U.S. Capitol. “They said ‘absolutely not’,” according to Lindell, who said he then told officers he would be happy to testify before the ‘dumb’ US House committee investigating the riot and what happened. caused it.

Comparing the FBI’s seizure of his cellphone to the “Gestapo in Nazi Germany,” Lindell said he didn’t want to hand over the phone at first, but did after calling his lawyer, who told him he had to. He said he ran the day-to-day business of five companies from that phone.

Officers also asked him why he was flying between different states, Lindell said. He told them, “I go to attorneys general and politicians and try to get them to get rid of these voting machines in our country.

Lindell said he would have returned the phone ahead of time if the FBI had “come and asked me.”

“I’ll give them whatever they want,” Lindell said. “They didn’t have to take my phone and make a big scene at Hardee’s in Mankato, Minn.”

In a Instagram post On Wednesday, Lindell told his followers to “fight back” against the FBI’s seizure of his phone “by shopping at MyPillow,” and shared a promo code.

The Associated Press contributed to this report.