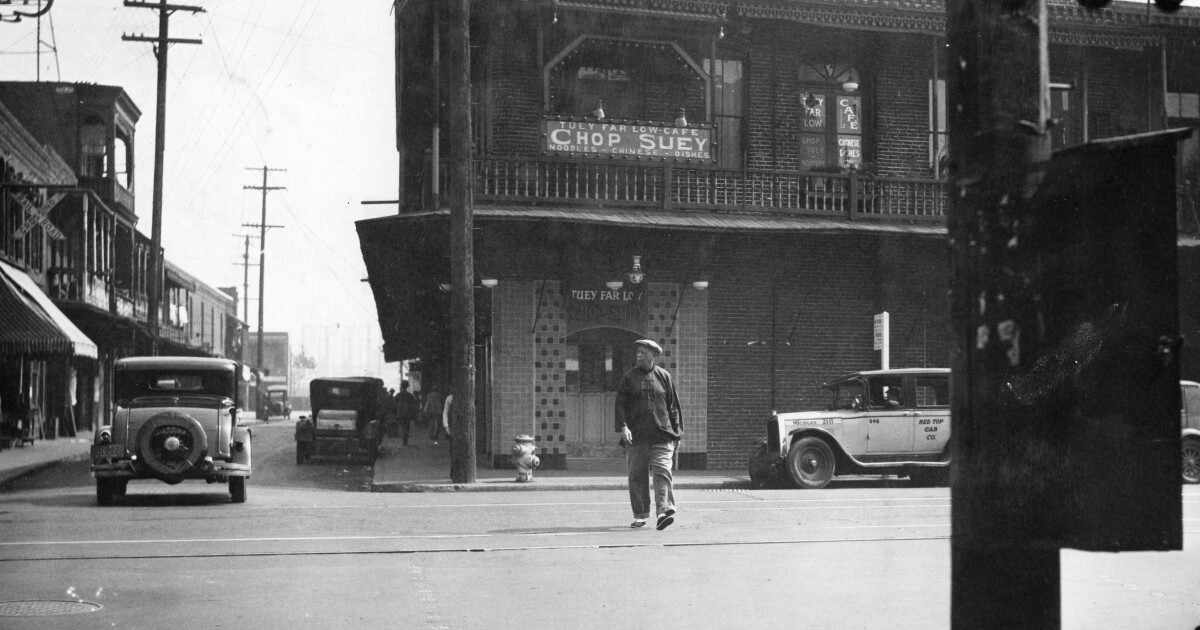 In a time of growing hatred and violence toward Asian Americans, the importance of recognizing and representing Chinese-American history becomes more important than ever. For his Chinatown History Projectthe Huntington-USC Institute on California and the West (ICW) has partnered with Chinese Historical Society of Southern California (CHSSC) and historian Greg Hise to reclaim Los Angeles’ original Chinatown neighborhood. When completed, the project will create web-based access to historical data and a publicly available augmented reality experience. Using this research, the ICW Podcast Team has taken this research from our “Western Edition” podcast to shed light on a story that has been largely forgotten, if not buried.

The second season of “Western Edition” explores the history and life of Chinese settlers in the West, including Chinatown hubs in San Francisco and Los Angeles. Many collaborators shared their incredible expertise and knowledge, allowing listeners to hear snippets of years and decades of work. Much of the foundation and research on which the season is based stems from our rich collaboration with the CHSSC.

As a member of the ICW team, I learned the power of connections and oral history while sitting around a long rectangular table inside the Chinese Historical Society of Southern California. Their headquarters at the north end of Chinatown includes two houses renovated to hold decades of documentation from families, institutions and writers. The Society was incorporated in 1975 with the mission to pursue, preserve and communicate to the public the Chinese and Sino-American heritage. Through its work, the organization is building a legacy of reflection and celebration of Chinese perseverance in the American West, even under the harshest conditions wrought by racism and violence.

Our team on the Chinatown Research Project and “Western Edition” relied heavily on the work of our colleagues at CHSSC to make this podcast a reality and an accurate representation of Chinese cultural traditions. At every step and in every episode, we have tried to convey our interpretations and findings as complementary to the work of our colleagues, taking care not to claim the pioneering work done by the Society and its members.

We sat down with Eugene Moy, Linda Bentz, Gilbert Hom and the team of current and graduate students from CHSSC Library and Information. Since I started with the team over a year ago today and have gone through thousands of pages dedicated to documenting Chinese companies and their daily lives, I realize how Little do I know about this complex history that I spent my post-graduate work studying and learning. What is clear to me is that what has been passed down from generation to generation is a strong pride and affinity for family; The continuing desire to overcome the obstacles that Los Angeles has created by discriminatory laws and behavior, such as the outright demolition of the original Chinatown neighborhood, is also evident.

The work is exciting. Our teams came together to compile a list of fifty families, people and businesses that we believe represented Old Chinatown. Descendants of prominent members of both old and new Chinatown have worked closely with the Chinese Historical Society of Southern California to organize and preserve this history. Among them are the Quon Brothers, whose family owned Tuey Far Low, a staple restaurant in Old and New Chinatown. The restaurant, which was originally at 300 Marchessault, was first built by Soon Doon Quon and the New Chinatown restaurant was completed in 1938. History was made at the original Tuey Far Low when the leaders of the Chinese-American community came together to found the Chinatown Project Association. Our conversation led to a discussion of the impact places can have on a community. Chinatown restaurants served as a meeting place to leverage political power and discuss the advancement of their families and people.

From our historical point of view, it is extremely important to be willing to understand different cultures and histories. It is equally important to convey your own expertise as a researcher to the communities in which you study to understand the cultural nuances. One learning experience I had was when I had the pleasure of visiting the Seaver Center located in the Natural History Museum to peruse LA County’s corporate incorporation records. Using my own understanding and experiences of American business practices, I made assumptions and conclusions about how Chinese owners ran their businesses. While meeting with members of the Chinese Historical Society, I learned about business reiteration contracts, where businesses would be passed on to newcomers in order to sponsor their arrival and stay. This enabled many Chinese to gain a foothold in their new country and escape deportation.

Working with communities that have built archives and collections from the ground up is an amazing place to turn to for contextualized research and history. When a community has the power and ability to determine how its history is portrayed, we all benefit.

What could be the impact of this work and these collaborations? Decades later, the conversations we have can change how the past is represented. We have a duty to honor the research and work cultivated by the Chinese Historical Society by depicting their culture and history as they wish, rather than as we, an outside group, see fit. Our research comes at a time of heightened violence, bigotry, and hatred toward Asian American groups, and it’s so important that our research does not lean toward or support tropes, stereotypes, and caricatures — that whether they are in the historical record or our time today.