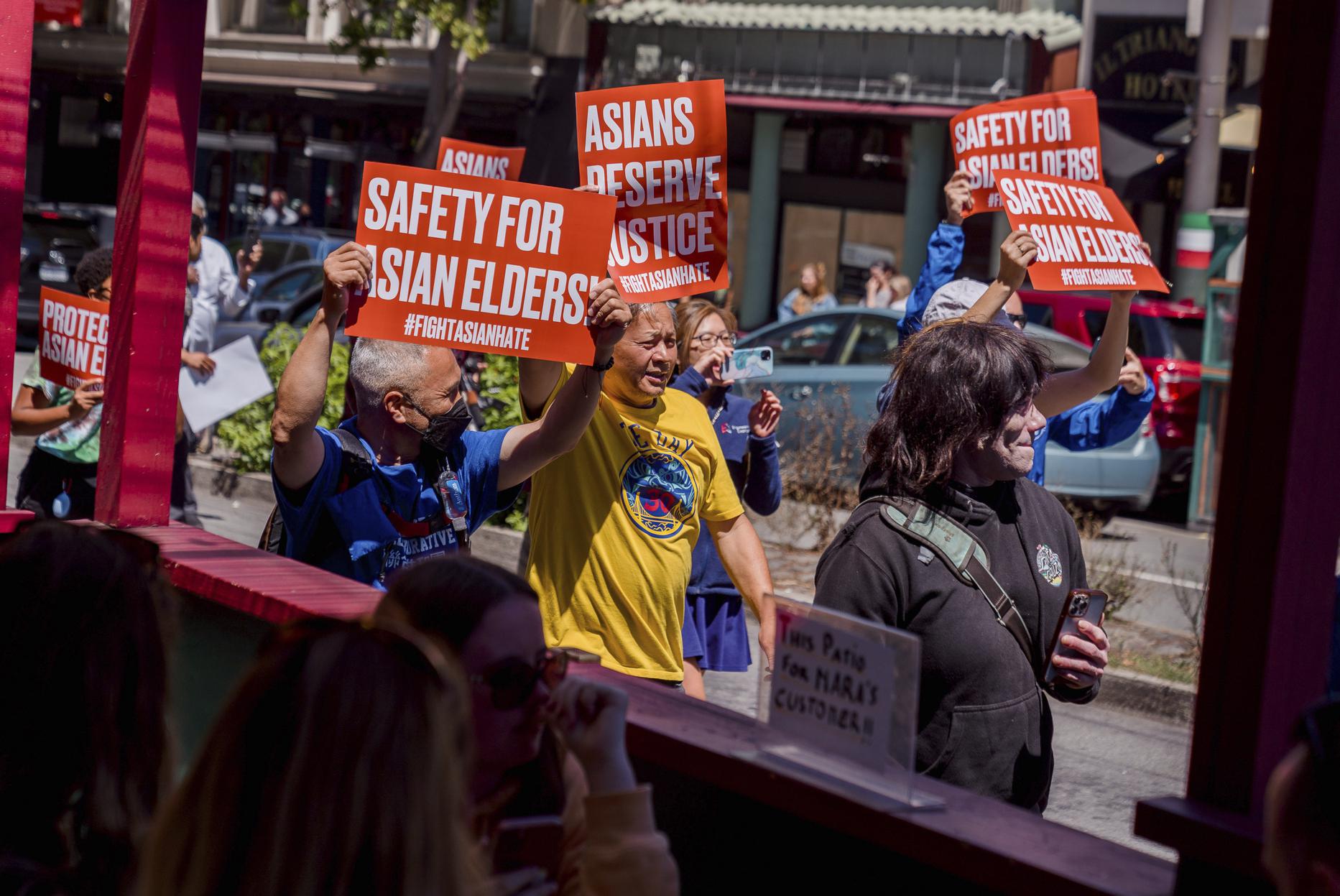 The campaign against violent attacks on Asian seniors erupted on Columbus Avenue on Sunday, where a raucous drumming band and protesters’ chants of ‘Combat Asian Hate’ distracted outdoor brunches and disrupted the flow of tour buses double-decker.

“We don’t need your donations. We don’t need your social media posts,” Hudson Liao, founder of Asians are Strong, said at a rally in Washington Square in San Francisco’s North Beach neighborhood. “We need you to get out there and be active. We have to occupy Columbus Avenue.

And for a time early Sunday afternoon, as many as 200 marchers did just that, moving noisily along six blocks of Columbus, with a police escort, to Portsmouth Square in Chinatown. Traffic came to a halt so that walkers on the street could pass.

Sunday’s march and rally came a week after a robbery and slime attack on a 70-year-old woman by four minors invaded her senior living facility, police said. A video of the attack obtained by KGO shows the four attacking the woman in an elevator, with one kicking her in the head. Days later, Gregory Chew, a former commissioner from San Francisco in his 60s, was knocked to the ground and punched in the face.

“These two events inspired us to organize this march,” said Charles Jung of the Asian Justice Movement, “but it takes place against the backdrop of two and a half years of attacks on Asians and much inaction.” .

The Asian Justice Movement is demanding that within 10 days San Francisco Police Chief William Scott set a date for a town hall meeting in the Chinatown community specifically to deal with attacks on Chinese seniors living in housing in low income, and to come up with plans to provide police security at these locations.

Jung, a San Francisco attorney, said the building where the woman was attacked and robbed lacked security.

Chief Scott did not attend Sunday’s rally or march, but was represented by City Central Station Lt. Mark Moreno, who had seen video of the attack on the woman in the center to the elderly.

“Just the impudence was despicable,” said Moreno, who declined to classify it as a hate crime, although he said it was plausible. “These people who commit these crimes are looking for someone who will not fight back.” No arrests have been made, police said Sunday, and multiple detectives are working on the case.

Sunday’s rally followed a similar and larger Asian Justice Movement rally held Jan. 30 across the city of Anza Heights, the site of a particularly brutal incident in which Vicha Ratanapakdee, 84 years old, was caught off guard on a street corner and hit with such force that his injuries proved fatal.

This attack was filmed by a security camera and Antoine Watson, 19, was charged with homicide. But it was not officially classified as a hate crime, which angered some of the rally attendees. Since then, “awareness has been building,” Jung said. “But now is the time to act and hold our leaders accountable.”

According to San Francisco supervisor Matt Dorsey, hate crimes directed at Asians increased sixfold in 2021 and there is no indication that they have decreased in 2022. Dorsey said the senseless violence against Asians reminds him the moment Matthew Shepard, 21, was beaten to death and left to die by the side of a road in Laramie, Wyo., because he was gay. This crime, in 1998, eventually led to hate crimes legislation at the state and federal level.

“When Matthew Shepard died, I felt it could have been me or one of my friends,” said Dorsey, who heard the same fear around anti-Asian incidents, especially after the attack on the senior center.

“Young people in the Asian community say ‘it could have been my grandmother,'” he said.

Jade Tu, 26, has attended enough of these rallies to show up with her own megaphone.

“We want to speak out loud and clear about what’s happening to our community,” said Tu, a San Franciscan native who grew up in the Sunset and said she’s always noticed some hostility toward Asians.

“But because of COVID, there’s been a narrative that the Chinese have spread the virus,” she said in reference to former President Donald Trump’s emphasis and racist language around the origins of the virus. virus in China. “It pushed the hate overboard.”